A weekend in Florida in February, plus high-end audio gear galore? Yes and yes. After five years (that’s half a decade, but who’s counting?) with rival publication The Absolute Sound, I’m now a free agent, so when stereophilic asked me to fly south to cover the Florida Audio Expo at the Embassy Suites in Tampa, it didn’t take long for me to agree.

It’s a less than sunny and chilly Friday in the Sunshine State (the third largest in the country, I’m told), but the excitement is burning. As Southern fashion would dictate, the vibe of the show is laid back and friendly.

Now, to kick off the audio coverage: one of my first stops in the demo room took me by surprise in several ways, first because there was a female show attendee in the room who didn’t was not there “under duress”.

Second, it was brought to you by a brand that’s brand new to me, LA-based AGD Productions.

Third, I learned that founder/designer Alberto Guerra manufactures all components (except speakers and cables) – including his own active devices – in the United States. Its proprietary GaNTube devices contain proprietary technology with a gallium nitride MOSFET power stage embedded in a glass tube. These unique devices power its architectural-looking Vivace monoblock amplifiers, which were designed by Albert War, to deliver 200W into 4 ohms, 100W into 8. The THD in these amp applications is stated to be <.0005 wp_automatic_readability="33"> 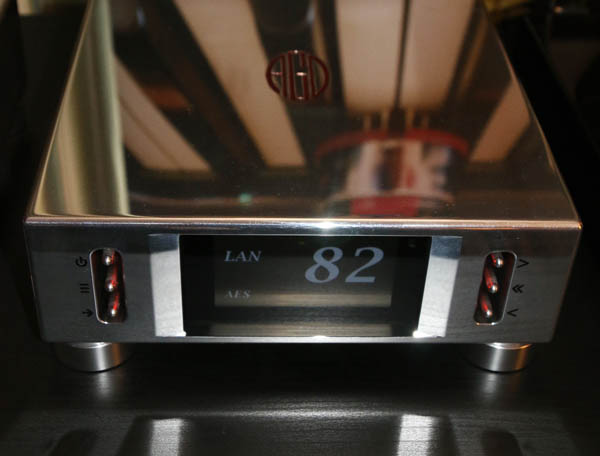 The AGD system sported a suite of tiny chassis that looked smooth and sleek in their special-edition gleaming chrome finishes, and sounded great. AGD has launched its latest product, the Andante, an all-in-one DAC/preamplifier/streamer that sells for $12,000 in the special chrome finish and with an optional built-in phono stage for MC and MM cartridges; $11,000 gets you the standard brushed aluminum chassis, which is machined from a single block. The Andante offers additional versatility with an XLR and three unbalanced analogue inputs, as well as the expected digital inputs: USB, AES/EBU, coaxial, TosLink and LAN (Ethernet) – and there’s aptX HD Bluetooth. Streaming is done via UPnP and DNLA, with the services of Roon, Tidal and AirPlay (wired network).

A pair of smaller AGD Audion monoblock amplifiers ($7500, chrome finish; $6800, standard), which feature the same GaNTube “valve” in a Class-D topology, delivering 170W into 4 ohms (85W into 8) , drove a pair of Ocean Way Audio Eureka Speakers ($12,000/pair), designed by renowned professional audio engineer Allen Sides. The Eureka is a reflex two-way affair with a 1″ silk dome tweeter and an 8″ aluminum cone low frequency driver. As for the sound quality of this combo, the violin strings (under a fairly believable bow) were lush and lovely. The pipe organ had a genuinely airy quality; and I was struck by the dimensionality I heard from both an acoustic guitar recording and a Wynton Marsalis track. The roundness and richness that many tube fans crave was on display here, without getting gooey or syrupy. The reading was detailed but not in a skipped way. A pleasing demo for the ears and eyes.